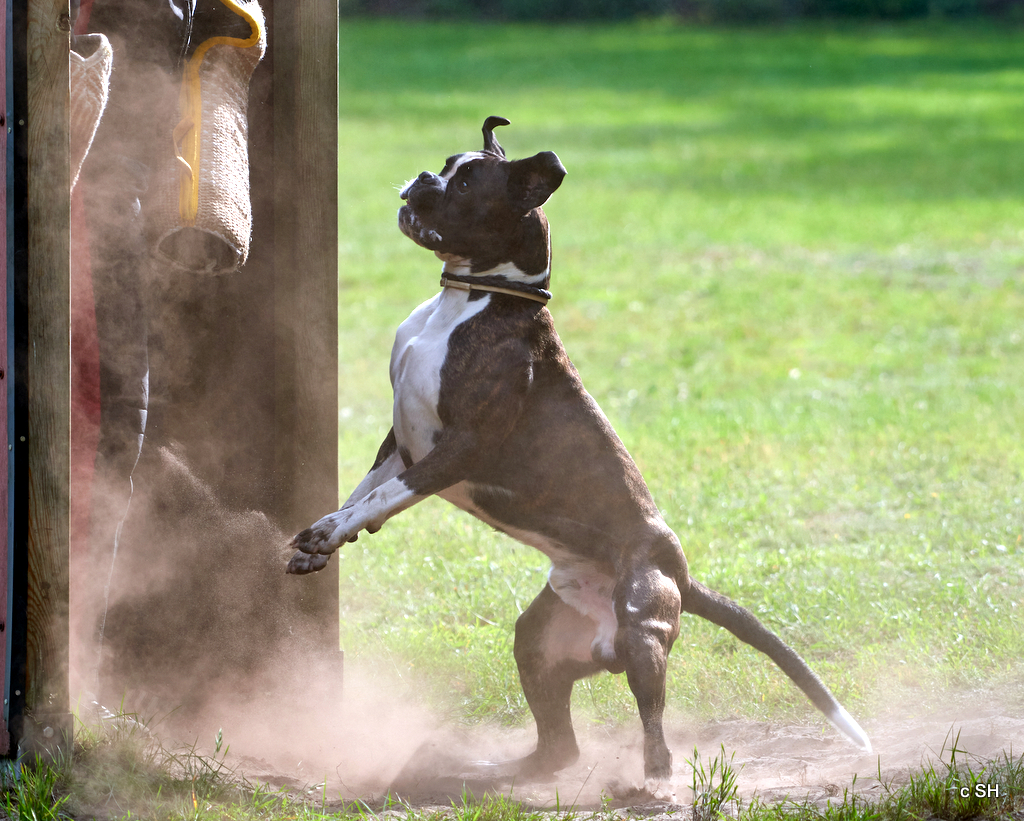 12. November: Garvin and I passed the FCI-IFH 2 in Oldenburg with 92 points in spite of a missed article.

June: Garvin had so far three mating acts with a total of 20 puppies. All puppies found a great new home and all litters were accepted faultless!

19.03. Garvin took part in the German Körung in Kalletal under judge B. Spelsberg. Körung is  a special breeding recommendation, where the dog has to pass conformation, temperament test and a protection trial. He did really great!

19.03. Garvin and I passed the FCI-IFH 1 in Lengerich under judge B. Knopek with 89 points under very demanding conditions. On our tracking field, he was the only one who could finish the track at all and could pass - I am very proud of the little one!

28.11.21 Garvin passed the IGP 2 with me in BK Lengerich under judge B. Mathews. For a long time our participation was on the verge, because I tore the meniscus in my right knee and can not really run well. He searched very well on the frozen field, but again he left an article behind (87 P). In the obedience he was very concentrated and correct, but he made several mistakes: stand instead of sit, back jump climbing wall missing (dumbbell was too close), additional command in send out with down, and partly he sat at the down under distraction :( (78 P). In the protection he was fantastic, only the search for the helper did not fit at all - certainly due to the lack of practice (90a P). Without the mistakes everything would have been in the very good - after my knee surgery and convalescence it goes on to the IGP 3!

We went to the training week in Holledau (Bavaria) and Garvin passed his IGP 1 under judge M. Felber! In the tracking he searched very nice, but articles were not important to him - 81 with 2 overrun articles :( In the obedience he worked very nice attentive and correctly, unfortunately I threw really shit at the hurdle, so he did not make the return jump and also came slowly with dumbbell -the bad conscience :) (83 P). In the Protection he then shined, gained 95a - the best protection of the whole test!!!! Many thanks to all who contributed to this!

What can I say, on 20.03.2021 Garvin should have finally taken his IGP 1, but this exam is also cancelled because of Corona :( We train diligently here at home, but it's just not the same!

The entire dog sport year 2020 can actually be forgotten! We train a little on a meadow in between, but this is no substitute for regular training with equipment and helpers :(
2020

On 18.07.2020 Garvin finally passed his BH in Lengerich under judge Cornell Puls! He worked very nicely, only the sit exercise I kind of messed up - and he showed a straight stand ;) But you could see that he enjoyed it, and he super likes to "work" - we'll keep going.
The street part was something very special: Cornell had set up a kind of course together with Udo Herrmann, Garvin mastered it super easy, he would probably like to have the remote controlled car for his birthday. The following "training week" was super great and was mega fun!!!

Actually, Garvin should have taken his BH VT on 28.03., but because of Corona everything is different. So I keep the boys busy in the garden, and we looked for a meadow where we can practice at least some obedience and tracking. A few photo sessions were also included! At the end of April we wanted to go to DK, but of course that was cancelled too :( The most important thing is that we all get through there in one piece - so take care and stay healthy!

Garvin passed his ZTP on March 1, 2020 in the group Lengerich under ZR B. Spelsberg :)

Garvin, daddy Cejay and I were in Holledau over New Year's Eve. Nice to see you all again! Garvin passed his AD on 12/31/19 with me easily under LR D. Strnad - his first exam :)

We went to the sounding and to the X-ray with Garvin. The little one is top healthy :)) Heart 0 and hip A1 - "a splendid hip" was the statement of the vet :)) Cejay and Donella, you did a great job!

Happy Birthday, my little one! Now Garvin is already 1 year old and had his first show one day before. Garvin reached in Krefeld in the youth class (9-16 months) as 2nd youngest a V4 with a great description from M. Wolf:

How time flies - now the little man is already 9 months, lifts his leg and did his first protection-training. He showed himself very impressively!
On short notice, we went to DK for the 2nd time this year - the weather was great, and we spent most of the time at the beach - and what can I say - Garvin swims :))

In the meantime, Garvin is already 7 months old and doing really great. He and Cejay get along great, and it's great to see the two of them interacting. Garvin is already tracking very nicely - and much calmer than his dad, who is always in a hurry :) Working is fun for him, and he also shows great prey behavior.
In April, we were together for the first time in Denmark at the North Sea. Garvin, who was rather reserved towards water at home, was immediately on fire for the fjord and the North Sea :)) He took it all in stride and has been a beach fan ever since!

Garvin is Cejay's son with his very best friend Donella v. Alt-Bayern. He comes from a perfect litter, has 7 siblings (4/4) and is a real sweetie. I had always thought about a second dog, but after the mating, this idea came more and more to the fore. I know Donella personally and also the breeding of Lydia - so it was not really a big consideration. The devil was in the details, but we somehow managed it all. Also, mother gets along with the two super - the best boys in the world :))
Garvin is showing very well and let's see what will become of him :)