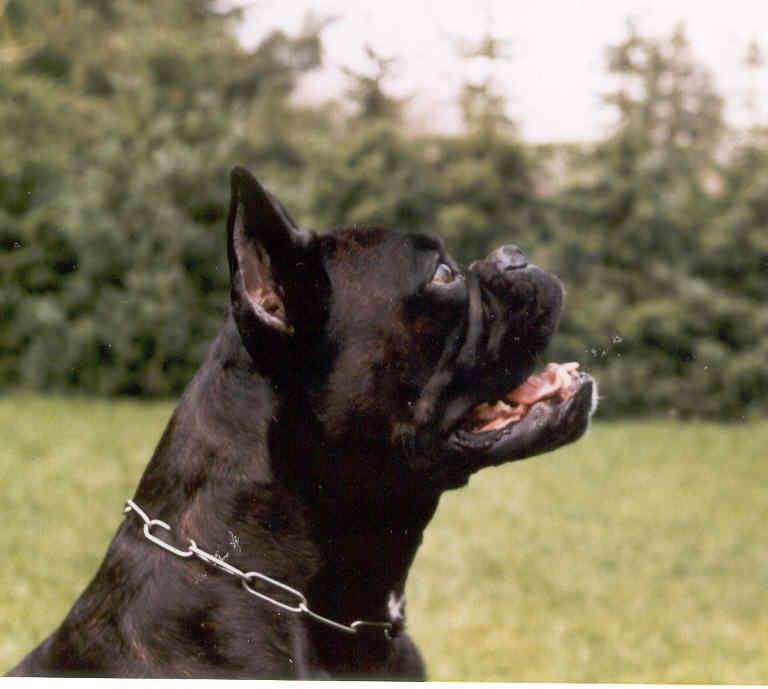 
Don was my first own boxer.
Since 1977 I drove regularly every Saturday with Willi Jurasik to the BK training ground in Münster and trained there mainly with Amor vom Wörsbachtal.
After endless debates at home, the time had finally come in 1980 and I was allowed to buy my first own boxer.
There was a kennel with litter in Münster and Willi showed me two dark males with the comment: they both have a wide muzzle, they bite, pick one :).
I took the one with the white tail tip, which however came off one day later, because at that time it was still docked. So Don vom Heitmannshof moved in with us at 12 weeks. He was immediately the star of all the children in the neighborhood!

Dönne was a real stubborn Westphalian. In retrospect I have to say that I was not up to him at the age of 12. At that time we also let the dogs grow up first before we worked with them - a mistake!
But we managed the SchH 3 (despite HD) together and the FH and we were even on a FH tracking-elimination. In addition, he got a V3 at the annual Siegerzuchtschau with me as the handler :)
I learned a lot with this dog and we were a good team. He could be very cuddly, but he decided when and how long :)
I really loved this growler and it was very hard for me to bring him then with almost 11 years in 1991 over the rainbow bridge.